This painting was painted before the time of the murders of Jack the Ripper. 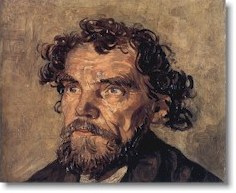 A number of fine arts specialists have raised doubts about the authenticity of Vincent van Gogh's Portrait of a Man, on loan from the National Gallery of Victoria (Melbourne), Australia for an exhibition at the Dean Gallery in Edinburgh, Scotland.

In all the BOLD print vanrijngo say,..

Who exactly is running this van Gogh website?  Would it be David Brooks the Founder, the supposed Van Gogh Authority after the few years he has spent putting this site together for his viewers,... or is it the Vincent van Gogh Foundation itself, possibly telling him the do's and don't, if he wants their endorsements.  I say myself, David Brooks has become a copying fool who fell completely in the compliance and under the control of the Van Gogh Foundation.

"This website is endorsed by the Van Gogh Museum, Amsterdam", and is their websites main theme.

The main reason I'm saying this is because David has become so compliant of the methods of the Foundation,... it is not even funny!  Just as a for instant,  just click on the link Portrait of a Man which is above in this article, taken right off his own website and see where it takes you,.... an absolute statement of not found on this server.

Frank Whitford, an art critic for The Sunday Times, denounced the authenticity of the painting based on stylistic reasons, in particular its lacking a certain "crazy intensity." Tim Hilton, an author working on a new biography of Van Gogh and Michael Daley, director of ArtWatch UK, which investigates art forgeries, also questioned the work.

Let me be a little critical myself about these critiques of Frank, Tim & Michael,... you all have helped the van Gogh Foundation out tremendously, now with their own assumptions that the had came up with,... that this work of art is not by Vincent van Gogh's hand.  Now don't you all feel really proud of yourselves?

In the art world, and certainly in the vast and complex scope of Vincent van Gogh's oeuvre, maintaining a healthy skepticism can be beneficial. Over the years a number of highly regarded museums, including the Kröller-Müller Museum in Otterlo, The Netherlands and the Nasjonalgalleriet in Oslo, Norway, have questioned the authenticity of their own Van Gogh works and, after careful study and evaluation, rescinded their status as genuine.

Well,... what happened to this one, was the National Gallery of Victoria (Melbourne), Australia on the Van Gogh Foundations shit list?

The concern about the recent spate of publicity surrounding the Australian painting is both the motivation behind the accusations as well as the reasoning backing them up. Some might argue that unfounded and rash statements may be a means of attracting global media attention. A number of years ago the Raelian cult group claimed to have created a human clone. This made headlines around the world. Eventually when no proof was ever produced, the claim was exposed as false. Similarly, it's short sighted and reckless to condemn an art work's authenticity without a thorough and proper evaluation. Especially when the doubts are based on stylistic concerns. And even more importantly when even these stylistic doubts are inconsistent among those condemning the work (Hilton claims the work is fashioned after Frans Hals or Eugene Delacroix while Daley claims that the painting is a fake, but clearly based on Van Gogh's own style).

One critic says fake van Gogh style while the other claims in the style of other masters.  Who are we to believe? Do peoples eyes really work that differently when it comes to knowing art?  Well, what I say will not make one damn bit of difference to the supposed MFA experts, but I'd say this is one of his best portrait of the time period that the experts know very little about.  Why,... well don't bother asking the experts, because they cannot tell you, for they have no real idea of what he was doing at that time because he was living with Theo for those two years in Paris and there were and are no letters to substantiate any of his works of art or what exactly his style was at that particular time.

Worse still is the consequences of these sorts of declarations. In 2000 Benoit Landais, an arts scholar, visited a Van Gogh exhibition in Martigny, Switzerland. Afterward he went to the press (in, what some have argued, was a quest for media attention) and condemned a full one quarter of the works in the exhibition as fakes. Not surprisingly, this attracted a good deal of publicity, much to the dismay of the exhibition's organizers as well as the owners of the works in question. In the end, none of the accused works was ever proven to be fake, but there has been speculation that private owners and museums may, in the years to come, become more reluctant to lend out works to various exhibitions if the result is that media-starved attention seekers cast a shadow of doubt upon their works. Ultimately, everyone loses.

I could give you a bunch of quotes from this supposed Vincent Sunflower art experts, but I guarantee you, they would not float with the majority of you, and definitely not with the experts of the Vincent van Gogh Foundation.

Is Portrait of a Man a genuine Van Gogh or isn't it? It's true that this work is unusual in that it's the artist's only horizontal portrait (although there is some evidence to suggest that the work has been cropped and may not have been horizontal originally). It's also true that Van Gogh never mentioned the painting in his many letters, although this in itself isn't unusual in that many of Van Gogh's finest works (Farmhouse in Provence and Olive Grove, for example) were never mentioned in his letters. Furthermore, the curator of the Edinburgh exhibition, Martin Bailey, a Van Gogh specialist for decades, has defended the painting as genuine.

Well, I'm going to haft to give it my own genuineness and defend this painting just how I see it.  I do believe that Vincent ran into this very strange individual on the streets of Paris 1886. Vincent paid him what he had to sit for him,... so to paint his portrait.  Vincent seen in him very much a danger,... but wanted to paint his portrait anyway.  Vincent being able in seeing with his own artistic eyes and being able to look into the future,..  knew he was painting a dangerous person,... while more than likely could be wanted by the law,.. for something he did or something that he did not want known about him, and even possibly of what he had planned for the one and ones like her who had infected him in London.

It's a good thing for Vincent, that he did not know this mans Identity or his past, or what he may have been planning on doing in the future.  It definitely would not have been very healthy for Vincent .  Vincent also knew deep down,... this man was a wolf in sheep's clothing,.. and like I said,..  a very dangerous one at that,.... If it happened to be o'l Jack,... it wouldn't surprise me at all.

Vincent did manage to add in a wolf's head into this mans portrait background,...  if you have eyes to see with you can see it enhanced in yellow on the left hand side of his face, While you can see another wolf's head laying up against his face as Jacks whole left side and his shoulder area as he is looking at you..

This painting was painted before the time of the murders of Jack the Ripper, and is still more than likely him. This person named Jack looks to be suffering just as Vincent and his bother Theo both did of syphilis.  You do know it is one of those eye things,.... you can see it in their eyes.

Can any of you see Vincent painting this portrait?

In the end, a balanced and reasonable exploration of this painting's authenticity cannot be undertaken until a proper study takes place. X-ray analyses (both diffraction and energy dispersive), laser-microspectral analysis as well as thin-layer chromatography are only a few of the methods of exploring the origins of an art work. Until such studies are undertaken any stylistic opinions, along with the accompanying condemnation and media frenzy, are misguided and irresponsible.

Yeh,... we know, all these misgivings going around does make one wonder who is actually right.  I do know that when science comes into authentication practices, and I might also add is accepted, there will be a lot of assumed art experts,... oops,.. let me rephrase that,.... MFA experts running and hiding.