A Van Gogh vanished in Australia yesterday. In the United States, a Van Gogh appeared.

This Url below will take you to another article saying almost the same thing, only published nine days later that the one by Kathy while Mary feeling the urgency to copyright her article as her own.  http://artsociety.suite101.com/article.cfm/van_gogh_paintings_lost_and_found

A Van Gogh vanished in Australia yesterday. In the United States, a Van Gogh appeared.

The first, a portrait attributed for the past 70 years to the Dutch master, was declared by experts to have been painted by someone else, probably one of his contemporaries. The second, a landscape, was discovered concealed beneath another Van Gogh painting. Head of a Man was brought to Australia in 1939 by the late newspaper publisher Keith Murdoch, the father of Rupert, as part of a travelling exhibition. It became stranded here after the outbreak of war, and was bought by the National Gallery of Victoria in 1949 for $4,000 (£1,700 at today’s exchange rates). It was subsequently valued, as a Van Gogh, at about $25m (£10.5m)

Doubts were raised about its attribution after it was exhibited in Edinburgh last year. Critics said the work, dated 1886, was in a different style from other Van Goghs of the same period, and was not mentioned in the artist’s letters.

vanrijngo says; Now don't you think that information is kind of ironic that it was not mentioned in his communications and letters in 1886 while living with his art dealing brother in Paris?

Now what is actually ironic is this little cut-out of theirs of the newly found painting found underneath the other painting of "The Ravine"  which they displayed with this face, saying one is and one is not Vincent van Gogh totally blows me away.  Now if an artist was to make a quick outline of a pencil sketch  before making the painting,... don't you think the above sketch would suffice?

The National Gallery sent the portrait - of a bearded, curly-haired man - to the Van Gogh Museum in the Netherlands for evaluation.

The gallery’s director, Gerard Vaughan, said yesterday that experts had concluded that it was painted during Van Gogh’s lifetime, but not by him.

A team at the same museum, meanwhile, had been examining a work called The Ravine, painted by Van Gogh in October 1889 and owned by the Museum of Fine Arts in Boston. While x-raying the canvas, they noticed that beneath it lay another painting, Wild Vegetation, a drawing of which is in the museum’s collection. The painting had been produced four months before The Ravine. 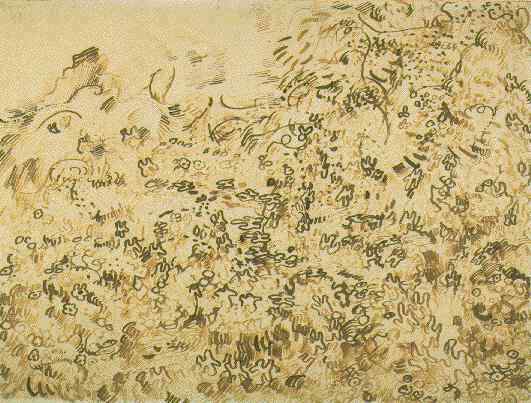 Art historians had always wondered if the drawing was based on a painting, for Van Gogh often sent drawings of his works to his brother Theo, an art dealer in Paris. He also relied on Theo to send him supplies, and would paint new compositions over old ones if the materials arrived late and he could not afford to buy his own.

Van Gogh, who only painted for 10 years before shooting himself dead, was confined in the St Remy clinic in southern France when he created Wild Vegetation. Armed with fresh materials from Theo, he was allowed to wander off into the hospital grounds and painted the surrounding landscape, including his famous series, Wheatfields.

Natalie Bos, a spokeswoman for the Van Gogh Museum, said: “One of our specialists looked at the x-ray and recognized it as resembling a drawing from the museum.” She called it an important discovery, and said the drawing, executed in brown reed pen, would be displayed in Amsterdam next week.

The painting of Wild Vegetation is typical of Van Gogh’s vibrant palette. It was discovered by curators from Amsterdam and Boston, who were working together.

In Melbourne, meanwhile, Mr Vaughan put on a brave face as he announced the loss of his Van Gogh. “The reattribution of paintings is part of the daily life in any major gallery with a large and complex collection,” he said. “It was purchased as a Van Gogh work, and had been accepted as a Van Gogh for more than a decade before the [gallery’s] purchase.”

vanrijngo says;  I'd say that the first article was a little more informative and understandable with picture showing what was being talked about. here is one I posted of some one else at that time with a little of my own writings. all the other links were disengaged by someone else other than myself.  http://vanrijngo.bravejournal.com/entry/23872

The article that you wrote a very nice, easy to see and very useful, we are waiting for further information, thank you very much
Cara Mengobati Kista Endometriosis Tanpa Operasi
Sunday, January 24th 2016 @ 7:04 PM