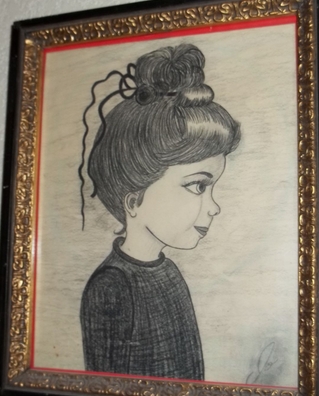 Vincent's drawing of his sister-in-law Jo.

Don't bother clicking on this link for it was dismantled.

Artist Vincent Van Gogh, known for being always short of money and materials, resorted to painting on tea towels according to the curator of the Van Gogh Museum in Amsterdam.

Louis van Tilborgh says a detailed examination of five pictures has yielded the conclusion the artist painted on towel-like materials.

Van Gogh wrote to his brother Theo from the mental asylum in Saint Rémy de Provence, 20 kilometres south of Avignon, on Nov. 16 1889, seeking another 10 metres of canvas. That roll did not arrive until three weeks later.

Tilborgh says experts decided to take a closer look at paintings from that period: The Large Plane Trees and Wheatfields in a Mountainous Landscape.

The off-white fabric in each painting has a grid pattern of tiny red rectangles, just noticeable where the paint is thin. Tilborgh says the tea towels probably came from the kitchen of the mental hospital.

That didn't end Van Gogh's creative use of kitchen items.

The following May, the 37-year-old artist moved to Auvers-sur-Oise, 40 kilometres from Paris, where he again ran out of canvas. At the time, he was creating one painting a day.

Experts say they believe the towels may have come from the Auberge Ravoux where the artist was staying.

Van Gogh, a tortured soul who suffered major bouts of depression, died on July 29, 1890, two days after shooting himself in the chest. He left 900 paintings and more than 1,100 drawings and illustrations.

vanrijngo says;   Where are their pictures, the ones being talked about? Well, I'll show you mine.  What do you say,... let get on their case and make them show us their own pictures of the ones their saying he did to possibly get another update from them of the ones that they are speaking of.

What a tortured soul you think, the way they would like you to believe,... Vincent to do such things as to paint on something that they the experts knew absolutely nothing about all these years prior,... seemingly before this date in history,....  August 31, 2007.  It's amazing to me that they even found these objects of art,... or even considered him of doing them, when it come to his works of art. Especially since he was not known to paint on anything but canvas,... and artist panel, which the paneling they hated to even mention. Vincent even painted on paper in the last couple of weeks of his life, which most experts are not willing to discuss or mention, unless they own one themselves,... or have one in their museum, and then it's mums the word.
Well now,  the truth of the matter is, Vincent painted on anything and everything, when he was in this state of being down and out. Whether it be an oil painting of his own or someone else' canvas, that tried out there own paintings skills, or even an old wide wooden butter spoon out of a flea market or someones kitchen.  When he ran out of canvas and supplies, and believe me,.. that was quite often, it didn't make any difference to him what he got his hands on.  It is just the matter of knowing what to look for,...  in his works of art,... and if you know his painting style and techniques that he had used,.... it really shouldn't be all that difficult for the one who are supposed to know these things as the experts as they are considered.  From what I see myself,... most supposed Vincent van Gogh art experts can't see these things,... and never will.

It is also said that Vincent had left 900 paintings and more than 1,100 drawings and illustrations.  What a crock!  Everyone can read for themselves,.. in all of the letter that were written and published,... exactly how he was known to paint and to make his drawings, not to mention how many he would do in a day and even up till all hours of the night-time.  If they keep up with their great findings, some art lovers out there in this MFA world of ours are going to start believing that some where down the line,... they have been lied to.
Now,... when Vincent runs out of canvases, like they now say,... what would you suppose would happen if he was running low on paint tubes of his painting supplies.  Well my art loving friends,... just have yourselves a peek at these painted on some kind of cloth while being laid down on cardboard.  This particular painting my friends is of Johanna, Vincent's brother's wife, while she is holding her little baby named Vincent van Gogh. They would be the other  van Goghs that I'd mentioned in pluralism, besides the artist himself.
I'd say myself, who ever this supposed artist by the name of S. J. Seiver was, the one who matted this painting, signed his or her own name to it, and get this, and only the matting itself, while naming it "Solitude".  I'd say that the person of the supposed artist should of had the name Dee in front of their last name.  I'm supposing who ever the artist was, might have found this piece of art on this cloth in their own art searches and couldn't find a signature, so therefore decided to say it was one of their own.   I'm also glad to say that they didn't screw it up as far as I'm concerned, involving the signing of it, and also in the naming of it,... for it was only on the matting,.... and not the art work itself.  That is not saying I condone what he or she had done, but if not the case, I might not be this wonderful piece of art's new owner.
vanrijngo