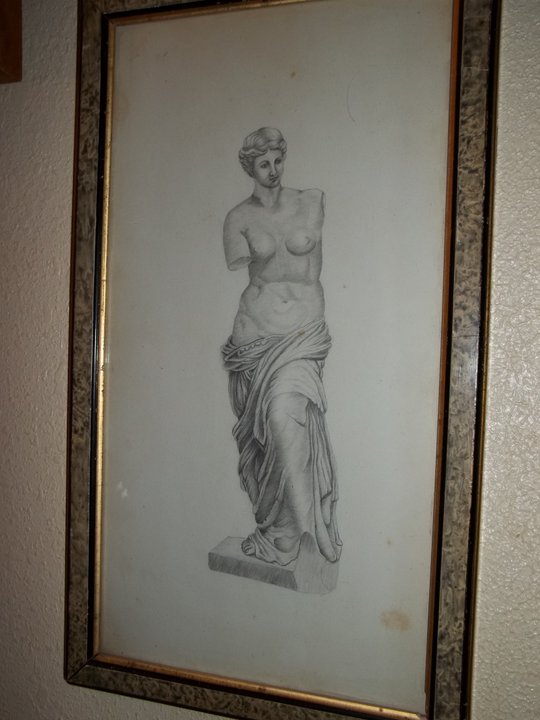 This is one of two drawings of Vincent van Gogh's pencil drawing of the Venus of Milo, and were done just as the ones which were mark with heavy crossed hatching line of a crayon scrawling through them by his drawing teacher Siberdt.

In these two drawings of the Venus of Milo Eugeen Siberdt would've been struck by the breadth of her hips and by her exaggerated belly lines of what he would probably feel was an essential characteristic in distorting her in just the same way as he did in Vincent's other copies of Millet's Sowers and Dela Croix's Good Samaritan.

When Siberdt saw these drawings of his he slashed them with strokes of his crayon in a fit of anger. It was then that Vincent could not control his own anger and flew into a rage: "so you bastards don't know what a young woman is like, God damn you! A woman's body must have hips, buttocks and pelvis's in which she can hold a child.

A lot of you should know from earlier posts what the belly, hips and buttock represents in this drawing of the Venus of Milo and if not I'll remind you

The Proud Graduate of his drawing class.

The Graduates,.... standing there so proud of himself with his hand on his hip and his elbow pointing right at you.

Vincent probably thinking,.... "Oh the teachers will surely be proud of me",... when and if they see in this drawing that I'm a proud graduate of their drawing class. I made a drawing similar in my drawing class at B.S.U. of Christ carrying his cross and while being critiqued by a young gal, she said I was trying to copy the old masters. lol 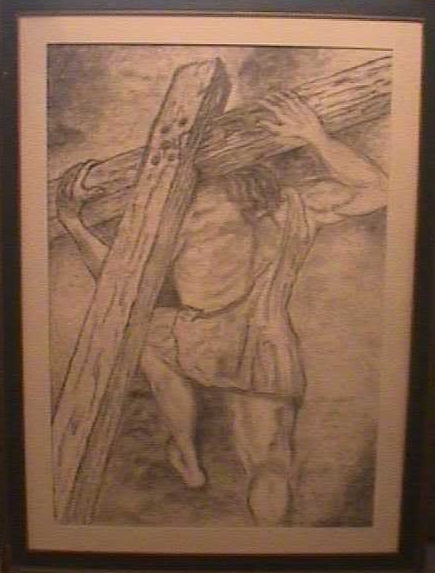 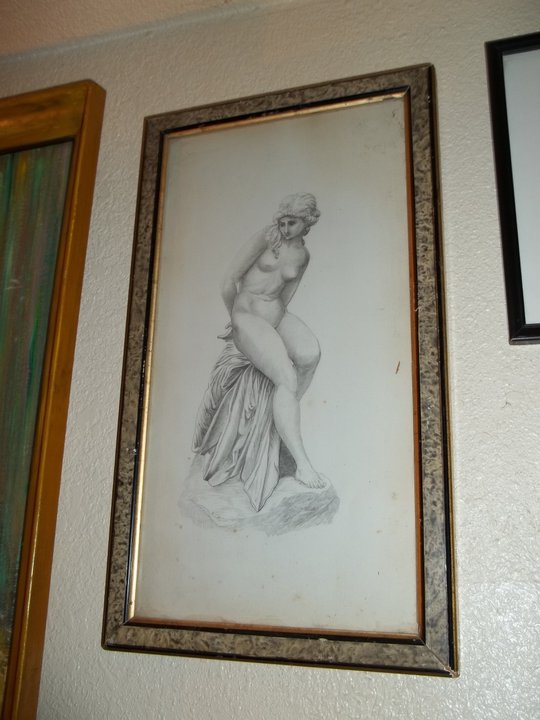 This is the other of the two drawings of Vincent's pencil drawing of the Venus of Milo, and were done just as the ones which were mark with a crossed heavy hatching lines of a crayon scrawled through them by his art drawing teacher Siberdt.

In This drawings of the Venus of Milo Eugeen Siberdt was struck again by the breadth of her hips and the exaggerated lines having her sitting on that stump or whatever holding something precious. He saw while distorting her in this way she was just the same as he had done in his other copies of Millet's, and Dela Croix's. Victor Hageman another of his art teacher had said, "this beautiful Greek Goddess had become a robust Flemish matron".

When Siberdt saw these, he again slashed them with strokes of his crayon in anger. It was then that Vincent could not control his own anger and flew into a rage: "so you don't know what a young woman is like, God damn you! This was his farewell to the academicians at the Antwerp Academy the experts say.

I'd say myself what Vincent was trying to tell these academicians in this work of art was exactly as he had told them. "A woman's body must have hips, buttocks and pelvis's in which she can hold a child". This would be very difficult for anyone of you to see without a little guidance from myself. This drawing of a woman is in fact holding her little one wrapped in a baby blanket as she is kissing the child's forehead while her own head is representing by flowers in her own bonnet or hair. What an imagination I must have?

This article and many other on your blog are very interesting.
I'm very interested in learning more about your site.
Do you have a fanspage on facebook or other.?

Hi Admin, it's my fist time visit your blog.
This article and many other on your blog are very interesting.
I'm very interested in learning more about your site.
Do you have a fanspage on facebook or other.?

Hi! .. Greetings everyone, my name taufik of the field. During my visit on this website, I found many articles that are useful, that indeed I was looking before. Thanks admin, and everything."
ZenPad untuk gaya dan aktivitas sehari-hari
Rental Mobil Malang? di Nahwa.co.id aja
Monday, October 12th 2015 @ 3:32 PM

The article you share very interesting to note, thank you for sharing and we wait for the next article
Wednesday, October 7th 2015 @ 10:26 PM